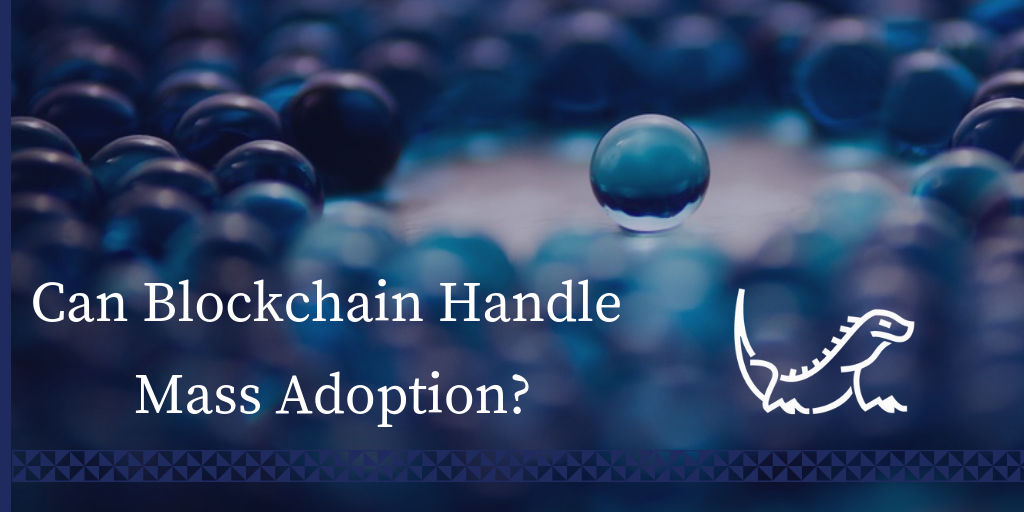 Investment in blockchain technology has grown tremendously over the past few years, and with that investment, a wide range of new applications are being tested and developed. While early adopters believe blockchain technology will become universally adopted, many still question its scalability.

The Case For A Scalable Blockchain

In 7 Big Obstacles To Mass Adoption Of Blockchain Technology, Niklas Göke compares the adoption of blockchain to the adoption of the global Internet. “Today, as we’re closing in on 30 years of the commercial web, we’re just about to reach 50% global penetration.” He argues that while it might feel like blockchain should’ve solved all our problems already, it will likely follow the same, slow trajectory of adoption that all new tech goes through, as blockchain technology is still just beginning to encounter the obstacles and challenges associated with mass expansion.

To acquire the level of global success that the Internet has reached in the last 30 years, Blockchain will have to:

The “friction” associated with how blockchain is currently implemented includes:

In general, users who would be targeted in a global expansion of blockchain are still not aware of the potential of the technology, and no direct, common use has been marketed yet that would attract general interest.

Reach Consensus Among the Community

In order to reach global adoption, blockchain technology must first build consensus within its community of users. As early adopters test the technology’s limits and explore new possibilities and opportunities, industries are also experimenting with blockchain. However, blockchain technology itself does not have a proper market, as regular users still turn to more familiar alternatives.

Furthermore, the different styles of blockchain companies (hybrid or fully blockchain), the ICO ban in certain countries, and even the energy consumption concern surrounding blockchain use all create challenges that the blockchain industry must overcome.

Among the numerous blockchain technologies, Ethereum might be the most reliable blockchain available today. However, Ethereum faces similar obstacles to mass adoption that other technologies face, including energy consumption issues, confusion about gas, environmental impact, etc. The Proof of Work vs Proof of Stake debate also poses a large obstacle, as there is not consensus among the Ethereum community about its path forward

Despite the fundamental challenges Ethereum still faces, it may be the most reliable blockchain currently operating, with several successful decentralized applications (DApps) currently in use:

333 ETH is an online blockchain technology platform enabling 333 ETH crypto trading.333 ETH has demonstrated an impressive ability to build user confidence, even beyond its original community. Any blockchain project needs great customer service and community support, as targeted users are not necessarily familiar with the technology, making it even more important to explain the project step-by-step. It’s essential to design with this challenge in mind, in order to encourage people to join a project and buy tokens.

IDEX is a platform intended for cryptocurrency trading that has found success largely on the strength of its defined market. IDEX targeted people that were looking to trade cryptocurrencies and make money. That audience found IDEX and started using it heavily, solidifying a loyal user base. Although cryptocurrency trading is not the same as using a traditional investing platform, modern investors are generally familiar with the technology needed to use them, and likely to try out a new tool if it means they can make more money.

Etheremon is an online gaming website that runs on the blockchain. It’s the perfect example of an improved industry (gaming) leading to blockchain success. Early blockchain adopters are often video game players, and these gamers are willing and interested in testing out new technologies that can improve their gaming experience. The fact that Etheremon ranks in the top 10 DApps demonstrates blockchain’s potential to extend to new industries, including advertising.

Varanida is a project that’s working to improve the digital advertising industry. Varanida’s founders have been working in the spacer for the past 12 years, and understand the challenges that users, advertisers, and publishers face on a daily basis. In order to improve the interactions between each party, Varanida provides a permanent, adaptable solution using blockchain technology.

The key to understanding the Varanida project is understanding that advertising is a kind of digital currency. Regulating digital advertising and giving “free” content a defined value helps bring stakeholders together via blockchain technology. Furthermore, the target market is so large that marketing it is equivalent to offering a new tool to any Internet user, saying, “Remember everything that used to bother you about the Internet? Consider it gone.”

Our first prototype is a life-changing ad-controller. It does not allow any unrequested advertising, and users are in control of what ads can target them, and how their data can be used (or not).

Our prototype is not yet running on Ethereum, but once deployed, it could become one of the largest DApps on the network, as over 130,000 users all over the world have already downloaded it. Several use cases for Varanida’s technology show the potential for Varanida’s DApp growth, such as advertisers reducing fraud, users accessing premium content with their VAD tokens, publishers keeping track of GDPR opt-ins, etc.

The blockchain industry is still in its initial stages of growth, but just like the Internet a few decades ago, blockchain technology is starting to expand as entrepreneurs are implementing it in all areas of global industries.

Blockchain growth faces many challenges and obstacles, especially in terms of practicality for the common user. However, some DApps have managed to overcome those obstacles by targeting specific communities, and improving specific industries.

Varanida is focused on improving the marketing industry, and working with all parties to build a better Internet. It’s been assumed that the world wide web is ruled by advertising, but the lack of regulations in favor of smaller parties created an unbalanced economic system where big corporations are the only beneficiaries.

By building a partially decentralized model, Varanida hopes to redistribute a fairer share to all parties on the Internet. These improvements include:

If you are ready to help us clean the Internet, try out our prototype. And if you believe in, or just hope for a better Internet, you can support us by contributing to our Token Sale.